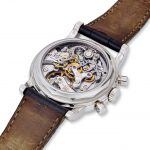 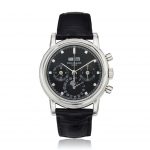 Platinum Patek Philippe ref. 3970EP with black diamond dial from 2002. The ref. 3970 was released in 1986 and replaced the ref. 2499 as the flagship perpetual calendar chronograph of the marque. Utilizing a Patek Philippe finished Lemania caliber, rather than the Valjoux caliber of its predecessor, the ref. 3970 remained in production for almost 20 years. Today, many collectors find the ref. 3970 the ultimate ‘bargain’ of Patek Philippe’s grand complication watches. Astute buyers are now seeing the ref. 3970 for what it is: a benchmark reference that is growing in popularity and becoming the trophy purchase of a new generation of collectors. This example in platinum with a confirmed black diamond dial was originally sold in July of 2002.