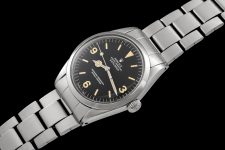 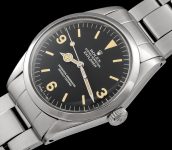 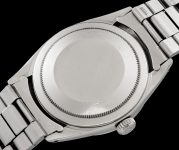 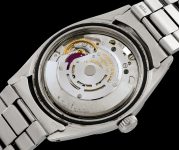 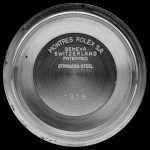 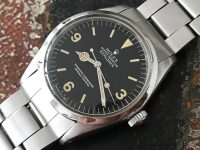 Beautiful example of Rolex steel Explorer ref. 1016, manufactured in 1975. Reference 1016 was produced from 1959 to 1990 and it represents one of the greatest classics and a milestone in the entire Rolex history. The present specimen is preserved in excellent overall condition. The emblematic “ 3-6-9 “ black matte dial is enhanced by the warm ivory tone of the indexes and the hands, which improve the charm of this timepiece. Definitely a great combination of sporty look and elegance. Case n: 4.085xx Calibre: Automatic, cal. 1570 Diameter: 36mm Box & Papers: None Manufactured in: 1975

Inspired by knowledge gained from this fascinating chapter of human adventure, the Oyster Perpetual Explorer, launched in 1953 to celebrate the victorious ascent of Everest, immediately acquired iconic status.

In 1953, Sir John Hunt’s expedition, in which Sir Edmund Hillary and Tenzing Norgay reached the summit of Mount Everest, was equipped with Oyster Perpetuals.

In the early 1950s, Rolex developed professional watches that served as tools and whose functions went far beyond simply telling the time. These watches were intended for professional activities, such as deep-sea diving, aviation, mountain climbing and scientific exploration. The watches generated lasting enthusiasm and became known as the watches of achievers.